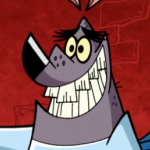 Hey everyone! You guys can call me FDSM if you want. Some of you may reconize my username from YouTube. I am known to make Character Design Reviews on Star Fox characters, dubbed parodies of video games and shows, various voice roles, as well as making animated parodies based on the Sonic Archie comics.

As you may know, I am a big fan of Sonic games and its Archie comics, the Star Fox series, Nintendo games, Transformers, Halo, Resident Evil, Metal Gear, Star Wars, and of coarse TUFF Puppy! I also like animes such as Dragon Ball Z, Bleach, Death Note, and Yu-Gi-Oh. I used to be into Bionicle like crazy, and even though it's done now, I still love that Lego series. Too bad that it's over. >:/ UPDATE: Lego brought it back! Whoo!

When it comes to TUFF Puppy, it is pretty much the only cartoon that I would bother to change the channel to watch (and by cartoon, I mean the goofy ones like this show). Personally, in my opinion, it's better then Fairly Odd Parents, but that's still a good show. When it comes to the characters, Kitty is actually my favorite because she's pretty cute and funny. lol I know she has a mixed reputation due to a lot of her crazy fans, but if you ignore that kind of trash, she really is a good character. Snaptrap and The Chameleon are tied for second because they're both awesome, and then of coarse there's Dudley on the list. I like the fact that unlike other main characters in cartoons, such as the Sponge Bob series, Dudley is actually rather clever when it comes to figuring things out. The Caped Cod and Quacky are also characters that need to show up more.

I do support Kudley, but in my opinion, it's starting to look unlikely. Their friendship and partnership is great, but they never really show any romantic interest in each other. Eh, but who knows, right? Maybe there will be an episode about that in the future. I'll keep a bit of hope for an episode like that, but I won't keep my hopes up too much, because I have a feeling we'll be waiting awhile-

UPDATE: Man, I recently watched the episode T.U.F.F. Break Up, and I didn't even realize it was the end of the show! True, I had my suspisions while watching it, but I figured the show wouldn't end so quickly. I think it just went by quickly because I can hardly find any episodes online. Still, I gotta see the rest of them, of coarse, so the hunt continues!

All in all, the show had a good run, which is actually saying alot; most shows don't get past two seasons, and many shows on Nick are pretty dumb now. If there is anything I regret not seeing in this show, it's Dudley and Kitty getting together. It's not super important, but I still would have liked to see it happen. They make such a great team, and they're best friends, of coarse. Either way though, it was sill a great show, and I loved every minute of it. May Butch make another awesome show like this one. Heck, another anthro cartoon would be pretty cool. ;)

Retrieved from "https://tuffpuppy.fandom.com/wiki/User:FoxsDumbSeriesMaker?oldid=129403"
Community content is available under CC-BY-SA unless otherwise noted.