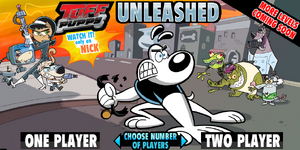 T.U.F.F. Puppy: Unleashed is an online Flash strategy game on Nickelodeon's official website and is based on the famous T.U.F.F. Puppy franchise. The game's characters are exclusively from the T.U.F.F. Puppy universe.

"Play for the forces of good, or choose to be a BAD DOG and rule Petropolis!"

Retrieved from "https://tuffpuppy.fandom.com/wiki/T.U.F.F._Puppy:_Unleashed?oldid=131873"
Community content is available under CC-BY-SA unless otherwise noted.