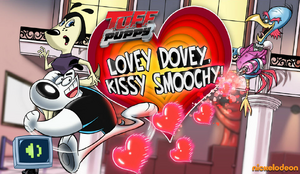 The player, represented by Dudley carrying Becky, needs to gain as high of a score as they can by collecting chew toys before losing all three lives to Bird Brain. The player can navigate by clicking around on the screen. Bird Brain stands on a balcony and attacks the player by firing the Lovey Dovey, Kissy Smoochy Gun at the ground area where the player is at. However, he randomly decides where he'll be firing instead of aiming at the player directly. Where he'll be firing is indicated by red targets that appear randomly on the ground. After a certain amount of time, Kitty will eventually come into the scene at the right side of the screen holding out a mirror. When you make contact with her, Dudley will be holding the mirror. There is light coming out of the mirror that alternates up and down at ninety degrees. Once the player clicks, Bird Brain will fire directly at the player and the direction the light was pointing in before the player clicked will be the direction where the ray from Bird Brain's gun will be reflected. Once the player successfully hits Bird Brain by reflecting the ray from his gun back at him, a mass of chew toys will fall from him providing an opportunity for the player to collect them and gain a lot more points while Bird Brain is stunned. However, the difficulty gets progressively harder the longer the player is alive and the more points they gain as Bird Brain begins to fire faster and pinpoints more places on the ground to fire at. Once the player loses all three lives, they will be given the option to play again.

Retrieved from "https://tuffpuppy.fandom.com/wiki/T.U.F.F._Puppy:_Lovey_Dovey,_Kissy_Smoochy!?oldid=134574"
Community content is available under CC-BY-SA unless otherwise noted.