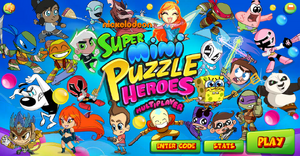 Do you have what it takes to be a Super Mini Puzzle Hero?

The game itself has a style similar to Tetris but with many differences. It uses two vertical orbs (that are rotated by the spacebar and moved by the arrow keys) instead of indefinite clusters of squares and the player has to use bombs and connect them to trails of orbs of the same color to get rid of them. They also must make their piles of orbs shorter instead of having to create a solid line. When the player gets rid of an orb (or a series of orbs) their opponent is attacked with another wave of orbs. The object of the game is for the player to get rid of as many orbs as possible and, in turn, make sure their opponent's pile of orbs reach the top and overload.

Retrieved from "https://tuffpuppy.fandom.com/wiki/Super_Mini_Puzzle_Heroes?oldid=138251"
Community content is available under CC-BY-SA unless otherwise noted.