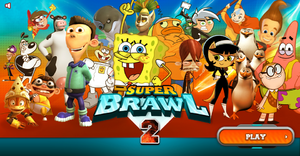 Super Brawl 2 is an online fighting Flash game on Nickelodeon's official website and is also the sequel to Super Brawl. The game's characters are from famous Nicktoon Shows.

Ready to Brawl? Choose from 22 of your favorite characters and battle for supremacy!

Customize your brawl. You pick the fighters and the stages.

Advance your way through the tournament, one challenger at a time.

Two fighters are better than one. Pick a partner and brawl together in this brand new feature.

The ultimate challenge. See how many players you can defeat with just one bar of health. 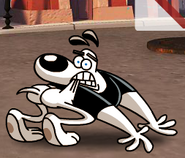 Dudley Chewing His Butt After Defeating a Character

Kitty Using Her Special In Brawl

Dudley Using his special against Spongebob Squarepants.
Add a photo to this gallery
Retrieved from "https://tuffpuppy.fandom.com/wiki/Super_Brawl_2?oldid=138252"
Community content is available under CC-BY-SA unless otherwise noted.