The Molecular Transformation Suit is a functional suit that allows The Chameleon to transform into anything or anyone he wants. However, in order for it to actually work, it must be wired into his brain.

The Molecular Transformation Suit is mostly a black jumpsuit with green circuits.

It is unknown about how it was first made, but it is hinted that the suit was made by the Chameleon himself.

The Chameleon's body is covered in black with green circuits. His eyes also become red.

This suit's ability allows the Chameleon transform into the shape of anyone or anything he wants. The suit can also form weapons.

The suit's main weakness is water or any kind of liquids. This only applies if the Chameleon is in a different form other than his own.

This version is more often the sound of The Chameleon transformation into a normal form. This sound can be clearly heard in one of the guitar gags. 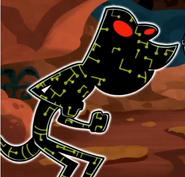 Add a photo to this gallery
Retrieved from "https://tuffpuppy.fandom.com/wiki/Molecular_Transformation_Suit?oldid=137668"
Community content is available under CC-BY-SA unless otherwise noted.