Start a Wiki
Daran Morrison Nordland (born November 1, 1964), usually credited as Daran Norris, is an American film and television actor and voice artist. Since 1977, he has participated in more than 400 films, video games, and television projects, including all four of Butch Hartman's Nickelodeon cartoons (The Fairly OddParents, Danny Phantom, T.U.F.F. Puppy, and Bunsen Is a Beast). He has voicing in other tv shows such as Knockout in Transformers Prime and Buddha Bob in Big Time Rush.

This article is a stub. You can help T.U.F.F. Puppy Wiki by expanding it. 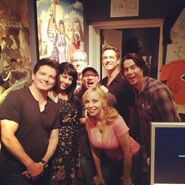 Add a photo to this gallery
Retrieved from "https://tuffpuppy.fandom.com/wiki/Daran_Norris?oldid=136747"
Community content is available under CC-BY-SA unless otherwise noted.