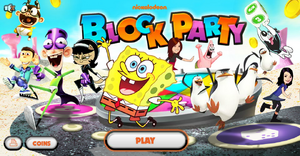 Block Party is an online Flash board game on Nickelodeon's official website. The game's characters are from famous Nicktoons, and also characters from live action shows, Victorious, iCarly, and Sam and Cat.

Have you joined the Block Party? Explore the worlds of SpongeBob, Skipper, Sheen, Fanboy, Dudley Puppy, iCarly, and Victorious and party on!

Retrieved from "https://tuffpuppy.fandom.com/wiki/Block_Party?oldid=125182"
Community content is available under CC-BY-SA unless otherwise noted.